Saffron spice comes from the dried stigmas of the perennial, purple, autumn flower Crocus Sativus, commonly known as the crocus.

The flower shows the orange-red or henna-colored stigmas from which the  spice is made. Do not confuse this member of the iris family with the autumn-blooming crocus, Colchicum Autumnale, which is a poisonous species.

The stamens of the crocus plant are available either ground or in strands, and they impart a rich yellow color and a pleasantly bitter taste to food once infused.

Keep reading to learn more about this beautiful flower and why its delicate stigmas have always been so valuable.

Where Does Saffron Come From And Where Does It Grow?

The quality of saffron can vary greatly depending on the country it comes from. However, the spice that originates in Iran is very famous in the world because of its superior quality. Only Iranian pure saffron has the highest quality, and therefore, it is considered the most expensive spice in the world.

In addition, the saffron crocus is cultivated in far-flung parts of India, Turkey, Greece, and Spain. It is even grown in the Abruzzi region of southern Italy, where the saffron growers in the small village of Navelli believe they produce the finest in the world, although the Spanish farmers of La Mancha do disagree.

The national food of Spain, Paella, is a combination of rice, chicken, seafood, vegetables, with the addition of the fragrant and colorful saffron spice. In the 16th century, the Moors brought the saffron crocus bulb to Spain. Peasant women gathering herbs for dinner were attracted to this beautiful purple flower, which seeds probably escaped and spread into the countryside.

Also in the United States, saffron is primarily grown in Pennsylvania. 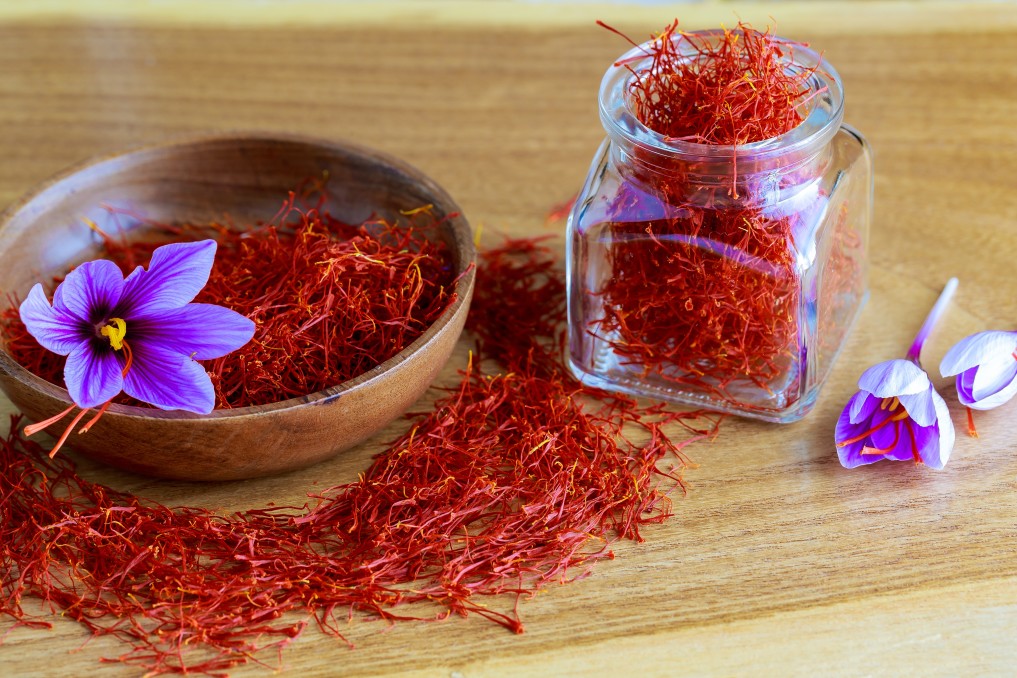 What Is So Special About Saffron?

Saffron has been prized since the dawn of civilization. For centuries, saffron has been used as a dye, in medicine, cosmetics and perfumery, and as a flavoring.

It was mentioned in the Bible, where it is accompanied by cultivated aromatics and only with the most precious of imported items of luxury and sensuality.

The saffron crocus has been cultivated in the Mediterranean countries since the time of King Solomon, and was already an important trade commodity back then. The Solomon’s gardens were graced with the crocus flowers around 1,000 B.C.

Because the crocus is so exotic, it is often misunderstood. The startling golden-yellow color of its stigmas was used to dye the robes of the Israelites and the festive garments of the Indians.

In ancient Greece, it was considered the color of royalty and the spice was used to dye the royal robes. Although it was also adopted by the high-class prostitutes during those times, even the Greek God Zeus slept on a bed of saffron.

In eastern Asia, the yellow color of saffron was considered a royal color and also had a religious significance.

The ancient Romans used saffron to perfume their baths.

The Arabs used to believe that keeping saffron in their homes warded off the presence of a dreaded lizard. They also thought that saffron dispelled melancholy.

In the 13th and 14th centuries in Britain, it was a very popular seasoning, however, only for those who could afford it. Back then, the saffron cost as much as 14 or 15 shillings a pound.

Court ladies of the reign of King Henry VIII of England tinted their hair with saffron until the monarch forbade it as he feared that a saffron shortage might reach his own table. The spice was used to flavor vegetables such as leeks, canola, cabbage, and parsnips.

In the 15th century, the German dealers from Nuremberg who were caught adulterating saffron, were burned at the stake.

In medieval Europe, the saffron spice was used to flavor and color the fish jellies and for coloring cheese.

Moreover, saffron was once used medicinally. George Graves wrote in the Hortus Medicus of 1834 that the spice possesses considerable power as an excitant, and in small doses, it has a tonic and stimulant effect, while in larger doses, it’s antispasmodic and sedative.

In overdose, it causes all the symptoms of intoxication, and when taken habitually, it turns the sweat, urine and saliva yellow, and gives them a distinctive smell.

Also, the “Arabian Nights” stories mention saffron as an aphrodisiac. 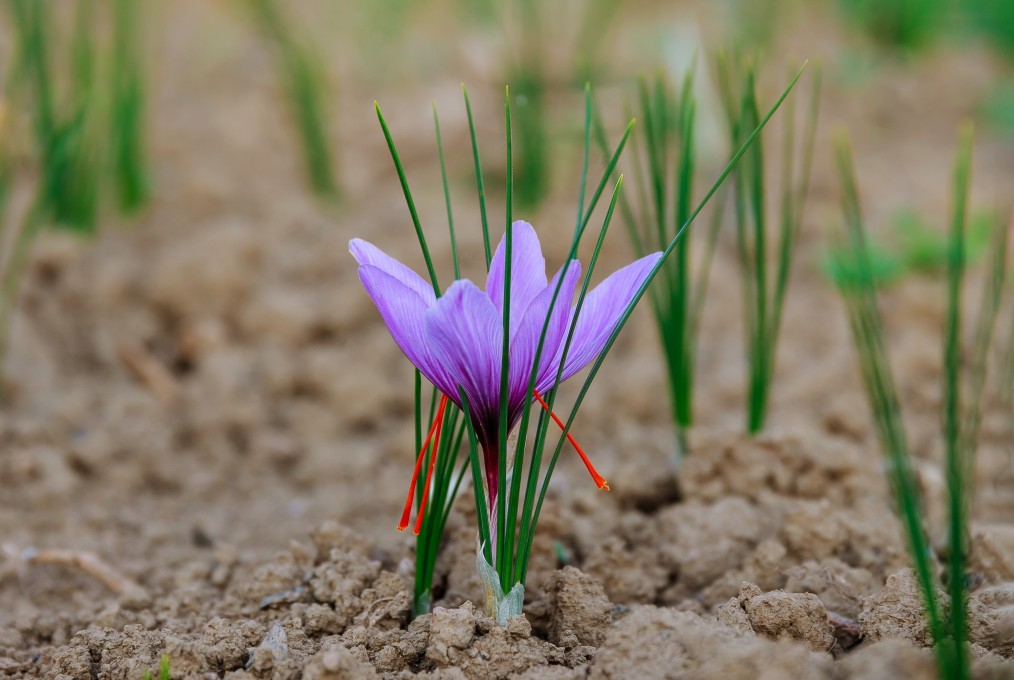 What Is Saffron Used For Today?

These days, many people still think of saffron primarily as a coloring agent, and it’s true as even the tiniest amount can give the entire dish a rich yellow hue. Saffron is still being used as a safe food dye option, although cheaper synthetic substitutes have become more common, which we’ll discuss below.

Saffron is widely used in all sorts of dishes for its color and distinctive aroma.

Besides its intense color, the fragrance is wonderful, it can be described as pungent, honey-sweet, and musky. It cannot be denied that when you cook with this spice, it fills your kitchen with a scent that’s instantly recognizable and unlike any other.

As for the taste, it is a classic ingredient of fish and seafood, fish sauces and fish soups like the French Bouillabaisse, but also chicken dishes, tagines, stews, and curries.

It is often added to dressings, is the best compliment with tomatoes and fennel, and is irreplaceable when it comes to rice dishes.

It’s also used in the preparation of plain and sweet breads, cakes, sweets, and desserts such as saffron sweet rolls or the Pennsylvania Dutch Schwenkfelder cake. In Europe, saffron is added to popular liqueurs like the French Chartreuse or Livornese Strega.

The Reason Why Saffron Is So Expensive

The Crocus Sativus flowers have acquired an astonishing commercial value. This is due to the complex harvesting process involved and the labor required to gather the stigmas.

The stigmas can only be removed by hand during the harvest season that lasts a little more than two weeks each year. Each crocus flower bears only three stigmas and these dangling, dried stigmas are the only parts of the plant being used. For this reason, saffron has always been a pricey commodity and is considered the world’s most expensive spice to this day.

It is estimated that 75,000 crocus flowers must be gathered and 3 stigmas removed from each flower. That’s 225,000 in total, just to produce a pound of saffron, and to obtain one ounce of saffron, more than 4,000 flowers are needed. A lot, but a tiny amount of saffron spice goes a long way.

Is Saffron More Expensive Than Gold?

The price of Gold is skyrocketing and the price of saffron has fallen over the past couple of years. For example, this spice used to cost up to $5,000 per pound in the 1990s.

The current rate of Gold is around $62 per gram.**

Thus, you can easily see that Saffron is not more expensive, but it is a lot cheaper than Gold, as of the year 2022.

Now, let’s do the math and convert this to the U.S. metric system.

And again, you can see that Gold is much more expensive than saffron, as of 2022. 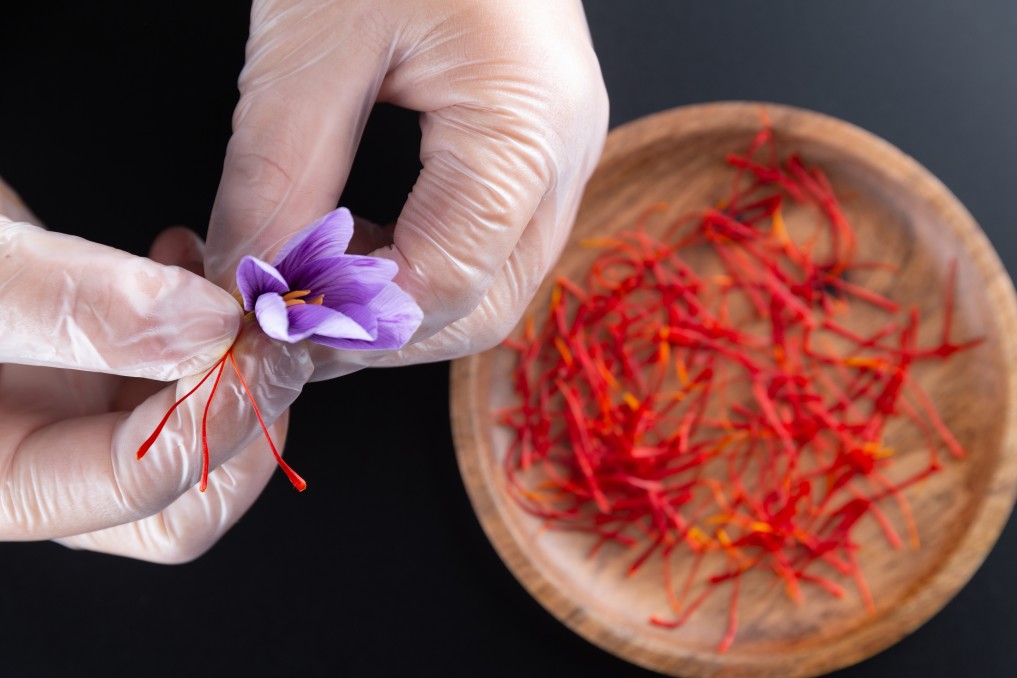 Is There A Cheaper Substitute For Saffron?

As saffron is very expensive, you might want to substitute it with a cheaper spice, such as:

This bright yellow-orange colored spice belongs to the ginger family and is also referred to as “poor man’s saffron” because it is less expensive. Turmeric adds an earthy flavor and color to foods, is a natural antiseptic, and can be used as a preservative.

Marigold is another good substitute for the costly saffron as it is almost as effective. Cooks like to use fresh petals or leaves of this garden flower, or the pulverized seasoning derived from the dried petals.

Marigolds have a mildly citrusy, slightly bitter, to subtly spicy taste, so get a feel for the flavor before venturing beyond one or two petals.

The safflower herb is frequently called “false saffron” as it has a similar ability to color food. It has often been substituted for the expensive saffron for coloring different cakes and confections.

Because of its distinctive flavor that’s pleasantly floral, and the sweet, a bit smokey, and chocolate aroma, safflower is frequently regarded as saffron.

How Can You Buy Real Saffron?

Saffron still costs a lot, and since it can easily be adulterated in powdered form, it is wisest to buy it in threads, that is, the dried stigmas. You will find them packed in small containers or bags in a fine-food store.

However, you should be wary of the powdered version, particularly if it looks like a bargain. There is an understandable temptation to adulterate saffron with cheaper coloring agents such as safflower or turmeric. The color will be strong, but not the taste.

Knowing how unique the harvesting process of the crocus stigmas is, it should come as no surprise that saffron is the most expensive spice in the world.

The whole idea of saffron is magical, and its use can be unimaginable but only until you try it. Once you find yourself under the spell of the crocus flower, you’ll be mesmerized forever.

Catch Up With Our Recent Posts 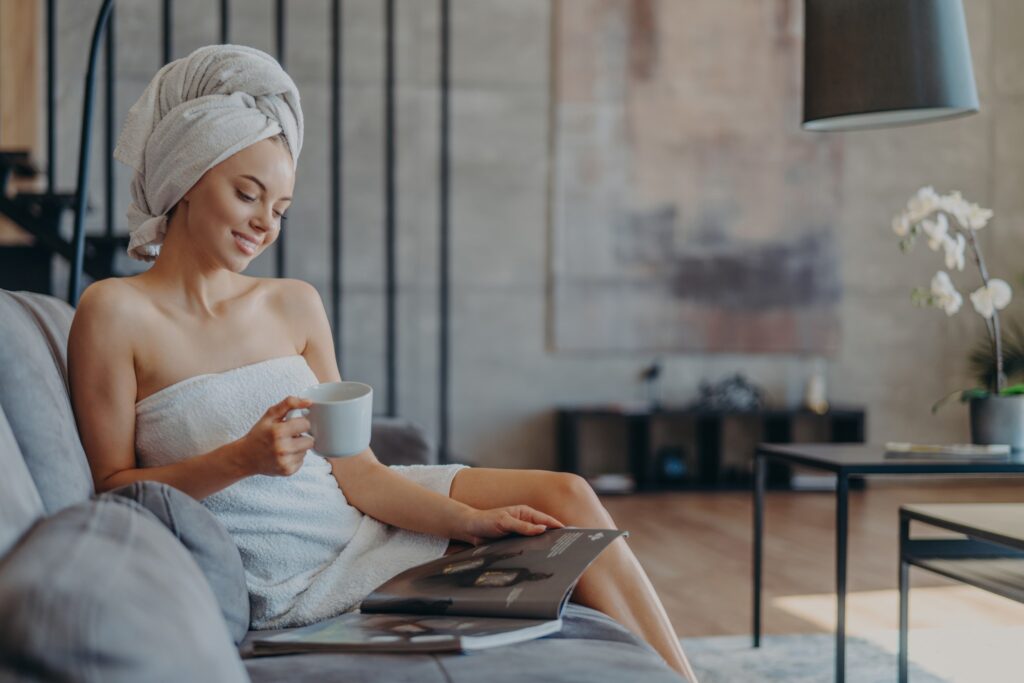 During the fall and winter, when the temperature outside drops drastically, we begin to look for ways to heat up. A warm bathroom is essential during the cold time of year so our time spent there is pleasant regardless of the outdoor temperature. And who doesn’t like to feel comfortable after getting out of …

How To Stay Warm After A Shower Read More » 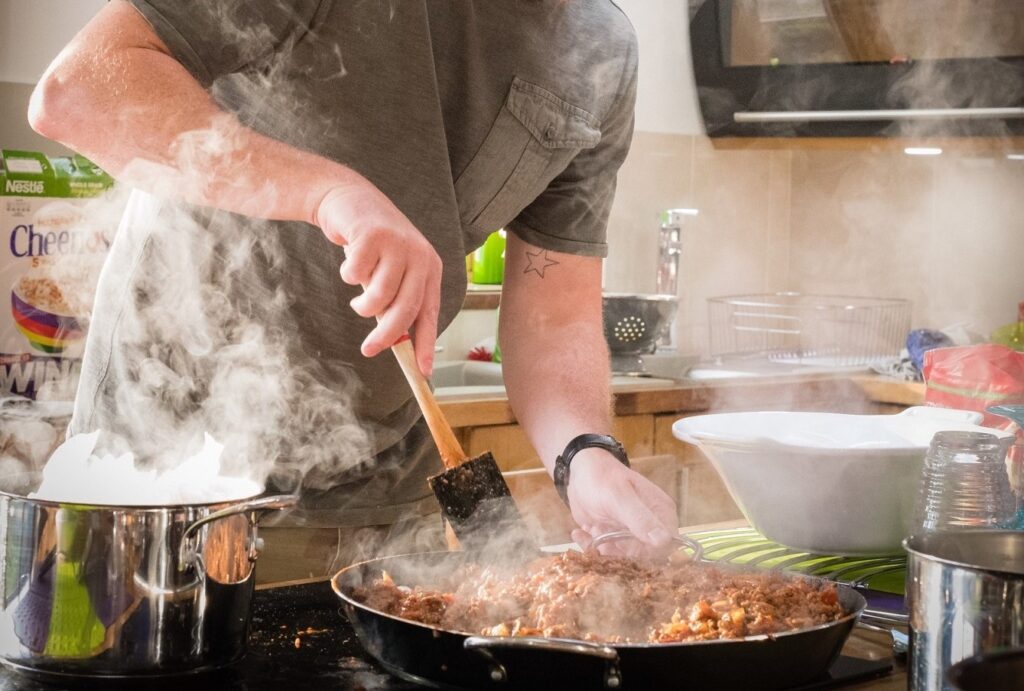 Preparing hot meals on a hot summer day, in a small kitchen, with poor air ventilation and outdated home appliances can be simply tiring, both for the cook and for other household members. Cooking can increase the air temperature in the kitchen by as much as 40 to 47 degrees Fahrenheit (or by about 4 to … 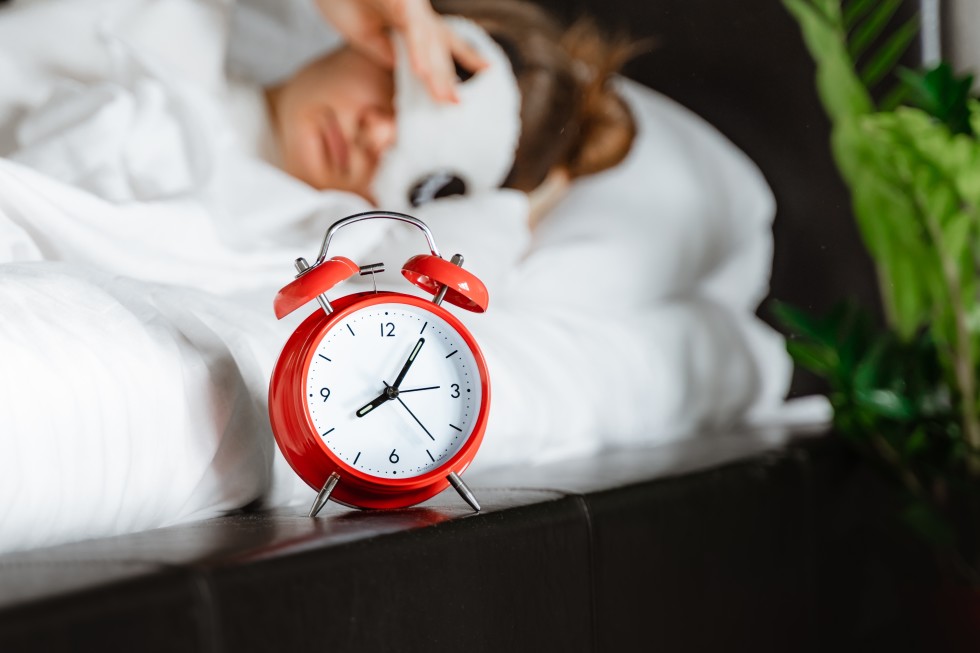 If you struggle to fall asleep easily at bedtime, you are not alone! Luckily, we suggest effective and guaranteed methods to help you fall asleep really fast. But first, let’s take a look at why it is important to sleep and dream, and the process that takes place in our brains each night. While …

Hacks To Fall Asleep When Not Tired Read More » 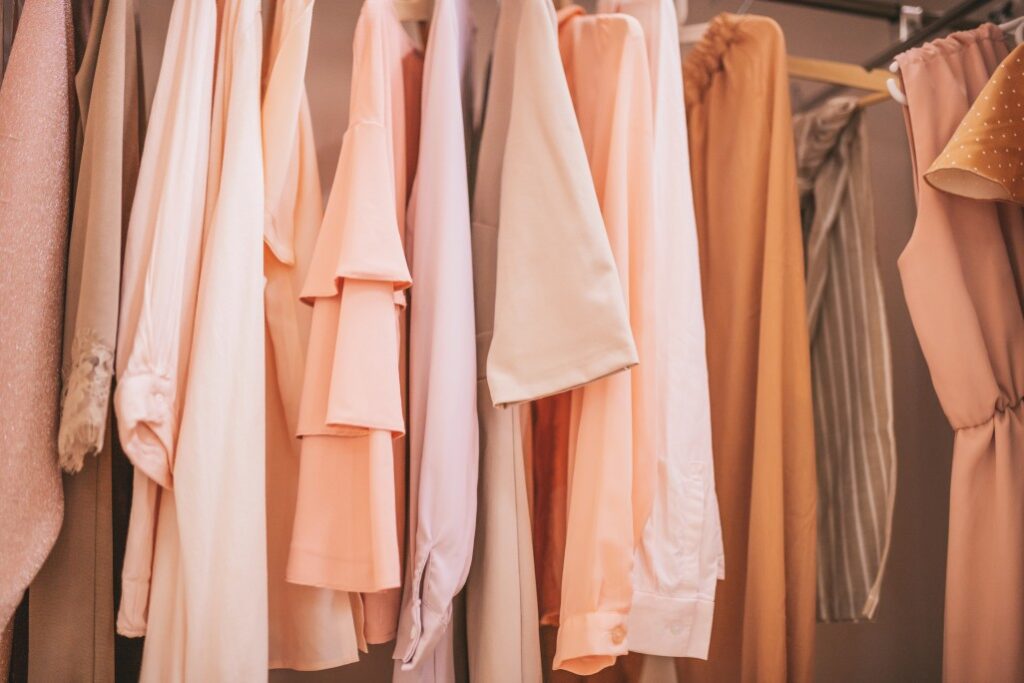 As a modern and health-conscious woman, you should be passionate about the environment and looking for new ways to minimize your carbon footprint. Saying that, sustainable living should be of your concern. You are obviously expecting the fashion products you’re buying to pose no risk to your health. But by being proactive and choosing … 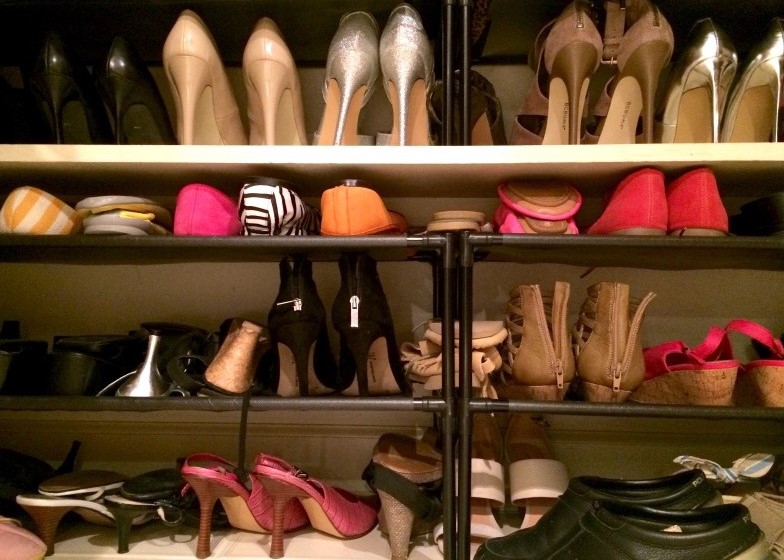 What Are Some Nifty Organization Hacks For Your Shoe Collection?   You might come home from work and find yourself tripping over the pile of shoes cluttered around the front door. You even might have more shoes stashed throughout the house under your bed and piled into closets. How can you organize this mess without … 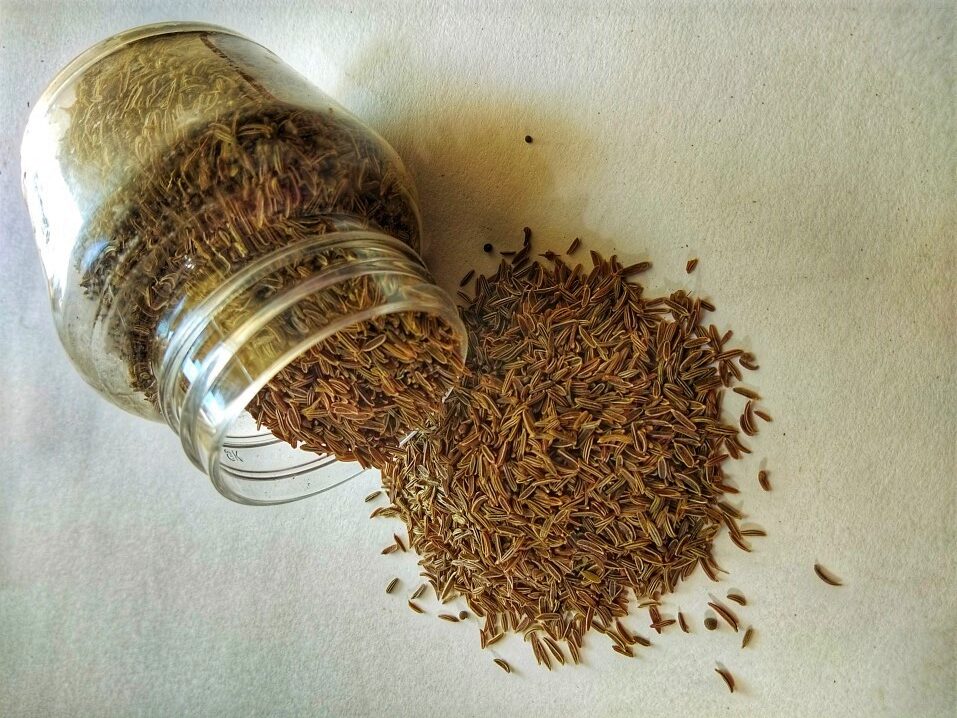 How To Use Cumin Seeds To Improve Health   The cumin plant is extensively used as a condiment, food flavoring, and a spice in culinary practices mainly of the Indian Subcontinent and some other Asian, African and Latin American countries. It has been used for thousands of years. In Biblical times, cumin was more valuable …

Find Here What You're Looking For: